The advantage of having a Google Nexus series mobile phone is that it is already Qi enabled. This means that you can charge it wirelessly using any Qi enabled charging pad.

The functionality and features provided in Google’s Nexus series phones # 4, 5, 7 are at par with the best phones out there (Even better we would say). Personally we feel, it’s the best android phone at half of the cost of Samsung Galaxy S3 and S4. However, like any other android or iOS phones you will not have to buy a separate charging case to make your Nexus receive wireless power, the phone is already Qi standard wireless charging enabled.

Initially, to support the Nexus phone’s wireless charging capability, Google had its own wireless charging pad. In fact it was not a pad, but a semi-circular shaped charger. The Nexus phone would sit in a slant position on the charger, which was efficient enough to charge the Nexus phone. Unfortunately, the slant positioning of the phone was not appreciated by the masses as the phone sometimes used to slip out of the charger. It was also not good to charger a phone that is bigger in size, like Nexus 10 or Samsung Galaxy Note 2/3 using the same device. 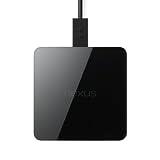 Recently Google launched a new and really convenient version of the Nexus Wireless charger (You can call this one a pad). It is a small square shaped device with size 60 x 60 x 12.5 mm. The overall shape is like a trapezoid, with a flat glossy square surface on top and a smaller square surface at the bottom. It is small enough to carry it in a bag or even in a pocket. It works on the Qi standard approved by Wireless Power Consortium.

The Nexus Phone Wireless Charging device is black in color and can support the charging of all Nexus series phones. The only problem is that it does not have magnets that can help align the phone in a right position for efficient charging. In fact, the device is so small that it cannot have magnets to align the phones, as the smartphones are much bigger in size than the Nexus Wireless Charger.

As mentioned before, you can charge your Qi enabled Nexus phones on any Qi enabled wireless charging pad. It’s true other way round as well – you can use the Nexus Wireless Charger to wirelessly charge any Qi enabled phone. To see the list of charging pads click here.